I read an article a few months ago that was all about the various riffs on Sherlock Holmes that had come out over the past few years, and the series by Sherry Thomas stood out to me as seeming like one I would enjoy. I also thought my mom would enjoy it, and as Christmas was coming up, it seemed perfect. I bought it for her as a gift, and then I also put the first in the series, A Study in Scarlet Women, on hold from the library (the audio) and then forgot all about it. Fast-forward a few months and I finally got it from the library (using Libby) and was ready to give it a listen. Here is my review. As always, it’s spoiler-free. 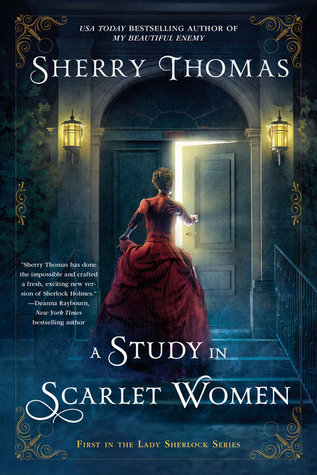 The plot synopsis (because it is easier than me regurgitating it in a less succinct manner) is as follows:

With her inquisitive mind, Charlotte Holmes has never felt comfortable with the demureness expected of the fairer sex in upper class society. But even she never thought that she would become a social pariah, an outcast fending for herself on the mean streets of London.

When the city is struck by a trio of unexpected deaths and suspicion falls on her sister and her father, Charlotte is desperate to find the true culprits and clear the family name. She’ll have help from friends new and old—a kind-hearted widow, a police inspector, and a man who has long loved her.

But in the end, it will be up to Charlotte, under the assumed name Sherlock Holmes, to challenge society’s expectations and match wits against an unseen mastermind.

So it is Sherlock Holmes turned on its head because Sherlock is in fact Charlotte, a woman with a very sharp and observant mind and perhaps less-than-stellar social graces, who really doesn’t fit into the confined mold that 1880s British society has set out for her, so she must find her way out of that mold.

So the bottom line? If you don’t mind a bit more academic prose and you like historical fiction/mysteries, and especially if you like commentary on society and gender roles as well as witty dialogue and a kind of quiet humor, then this book is for you. So what are you waiting for?

2 thoughts on “Book Review: A Study in Scarlet Women [audio]”

I am still learning and growing and figuring out what it means to be a human in this crazy, messy world. Books and sunshine are definitely part of what brings me peace, that's for sure.
Q: What's a book outside your usual genre that you read and loved?
Q: Imagine you have the day off and completely to yourself in the city/town where you live (and for fun, imagine we are pre-pandemic). What 3 things would you do?
Q: Predictive text time. Fill this one in: "I like Wednesdays because ________"